Mahuli Fort at 2815 ft. is a popular trekking destination near Asangaon and a paradise for rock-climbers because of many nearby pinnacles. This mountain complex is actually a group of two or more hills with common cols and pinnacles.
There is no sign of monsoon this year and the heat in Mumbai is becoming unbearable so I and a few of my friends thought that heading to the hills would be some sort of change but we were wrong.
We caught the morning 7:15 Kasara Fast train from Kurla which reached Asangaon by 8:30.After reaching Asangaon station head west to the rickshaw stand, the rickshaw drops you to the base village of Mahuli for Rs 260 it is a 5 km walk to the base and a rickshaw is recommended as the trek can be a little difficult.

After reaching the base village we clicked pictures of the fort which we were going to go to and started towards the fort, there are small hotels at the base which help you with food and snacks. One of them was friendly his name was Vilas and he directed us all the way to the top. You can also call him up if you think you have lost the way.
We followed his directions and started with our trek, the directions were simple, temple, cross river and follow the route to the top. The route was marked with signs boards and arrows throughout so the chances of getting lost were very less. We reached the temple crossed the river and started following the route to the top. 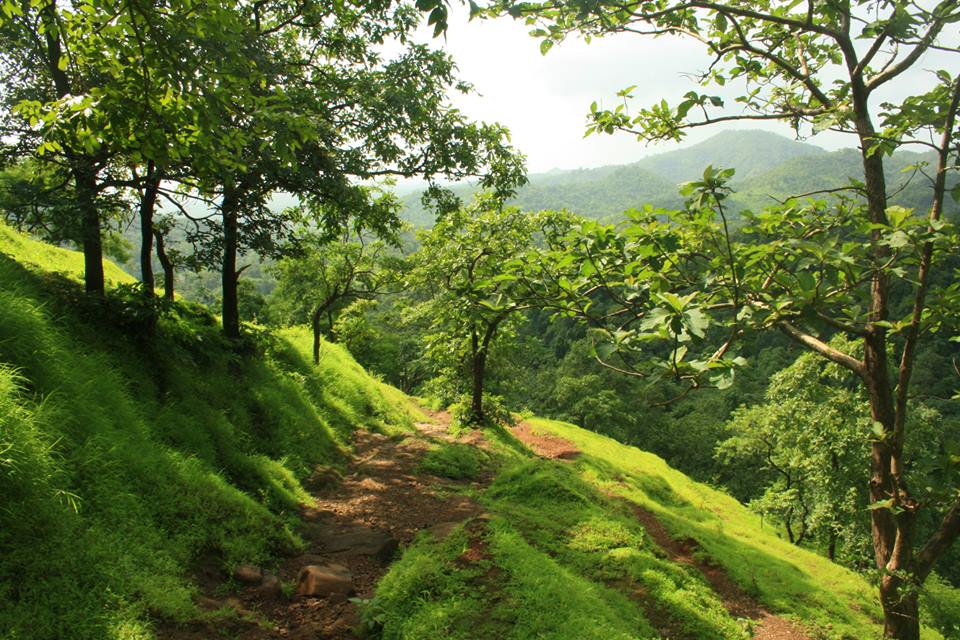 They are mostly converting the Mahuli fort into a nature park, which can be seen by the construction activity that was going on at the base.

As we started moving towards the top the view started changing and it was greenery all around throughout we were accompanied by Karvi flowers which bloom once in seven years at some places they were fallen on the ground and gave the appearance of a very beautiful carpet.It was very hot and there was no breeze at all, but the beauty of these Karvi flowers made us forget half of our troubles. There were also some areas which were large open green meadows at various points of the trek where we could rest and enjoy the slight breeze. 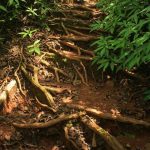 Root path to the fort 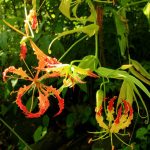 Flowers on the way to the top

Flowers on the way to the top

The route to the top was scenic and very beautiful and we could see different types of flowers mainly the Karvi and it wasn’t even the time for their complete bloom, according to the articles I’ve read after returning they will be in their peak during 2016.All the other flowers and birds on the way were also beautiful and made us forget the heat which was getting stronger as we continued with the trek.

Green Meadows on the way to the Mahuli top

The Trek is considerably easy till the top if not for the heat which made it tiring only the final portion of the trek is a little difficult as you have to do some rock climbing to reach to the Mahuli Fort top. After the difficult patch you see a ladder, climb it and you have reached the Mahuli fort.

It is actually not a fort but ruins of a fort. We couldn’t go about exploring the fort as we were late and it would take more than 2 hours to explore the whole fort. So we sat under a tree had some snacks and visited the Maha Darwaja which we had seen in the map of the fort, This is also the only place where you can refill your bottles with drinking water.We filled our bottles and did a little bit of photography of the forts and its ruins and then started heading back down. The descent was much easier as compared to the climb but it did take a toll on our toes. The descend was non-stop and we reached the base village in 2 hours, Visited the hotel and had some breakfast of poha and mazaa, and called up our rickshaw guy who had dropped us to the base village, by the time we had done with our snacks the rickshaw arrived.

We sat in the rickshaw and headed to Asangaon station, the frequency of trains back to Mumbai is less so after a wait of half an hour at the station the train arrived, we boarded the train and headed home.

Thus another successful trek was completed and luckily and unknowingly we got to see the Karvi flowers during their blooming time which was an unexpected surprise and one of the things that just happens.
The cost of the trek was about Rs. 300 and the difficulty is moderate, it can turn a little difficult during monsoons as the rock climbing can turn a little slippery

To Watch the Video of Mahuli Fort Click Here