A long pending trek, after a lot of discussions and planning we finally decided a date and made a plan for Rajmachi.Like always out of the many planned people only some of them turned up for the actual trek.

So taking the first train from Dadar in the morning we reached lonavla at about 9 o clock the train journey was smooth but it is preferable to board the train from Dadar as it gets crowded at dadar and finding a place would be difficult after Dadar.

So on getting down at lonavla we caught a rickshaw to tungarli dam,It costs us something about 200 Rs.After getting down in the middle of nowhere the trek seems to begin and started following the route the rickshaw-wala told us to take.Our first stop was Tungarli dam,the greenery and the the slight drizzle made it a very nice place to spend some time there,after spending some time we continued with our trek.

The route was basically a tar road for most of the part,On the way we waited for some breakfast of bhajiyas and some tea.The tea the bajiyas and the rain was one of the best combinations,after having the breakfast we continue with the walk to rajmachi.

Greenery and waterfalls gave us company throughout the route,after some time the tar road gave way to mud roads this is where the road got a little difficult and slippery.There is construction going on and tar road is being built till the rajmachi fort.I think you should go visit it before the road gets completed.After walking throught the slippery muddy road and the many streams and waterfalls we finally reached the base of rajmachi.There is a camping ground there we rested for some time and had some snacks which we had carried. 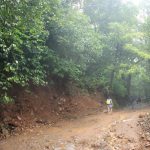 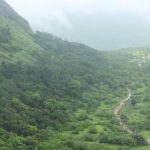 The route to Rajmachi

Waterfalls on the way

We left the spot after clicking a few pictures and headed to the base village(udhewadi).YOu have to pay a small entry fee before entering the rajmachi fort.This is usually taken for mantaining the fort and most of the villagers earn income by helping the trekkers with food and stay.We ate lunch at one of the villagers place and as we had got a Tent with us asked the villager if we could set up camp near the fort,We got a go ahead so we started climbing the fort,there are steps till the base of the two forts and it is very well maintained.As it was nearing sundown we quickly set up camp and got ready to spend the night in between the two forts not knowing what we were going to face a storm that night.

Camping in the storm

As The Sunset soon darkness filled over the sky, perilous lightning strikes filled the sky  creating a gloomy look.The trees clashed,thrashed with the wind.We had our dinner hoping that it would just be a passing shower but we were wrong,The winds only grew stronger and rain harder.Throughout the night the rain kept pounding on the tent,the thunder and the sound of the wind made the whole atmosphere scary.The rain was so much that the water started seeping into the tent. Somehow the night passed and by morning the rain stopped. We packed the tent and then moved to the shop where we had our lunch for some chai and poha.

View from the fort

After the breakfast we kept the bags at the shop ordered for the afternoon lunch and went on to climb the rajmachi.The climb to srivardhan was easier and steps led the way to the top they were broken at some places but somehow we managed to reach the top. The view from top was awesome and the other fort of manoranjan could be clearly seen from the top. It took us an hour or two to roam the top of the fort.

The greenery, the rain and the slight breeze made the environment beautiful and peaceful making us want to stay there for longer but then we had have lunch and return home too. So we started our descent the descend did not take us much time, we had our lunch rested for some time and started our descent towards karjat. 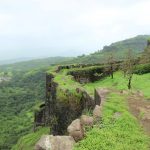 The descent was difficult as it had rained the previous night and the rocks and mud had turned slippery. It was a adventure in itself to get down from the karjat side after every opening there was a different terrain altogether, A rocky patch, a forest, a normal trail we saw it all. The rainfall in the middle of the descent increased the difficulty but also made the descent more fun. After 5 to 6 hours we reached the base karjat.

From here we took a rickshaw to the station it costs us Rs 300 to karjat from where we took a local home, Thus ended our trek to rajmachi we did not even think that we would face so many different things these two days of trek. Thus ended a wonderful and adventurous trek to Rajmachi.

To Watch the Video of other treks Click Here